Jahn Luhn Gohn was our first Serenity game and in fact our first game of any sort with the Cortex system. The campaign whisked along to a full 13 episode season and we had an total blast the whole time. This campaign secured the Cortex system as our all-time favorite gaming system to date.

The name of our ship in the game, Jahn Luhn Gohn, also proved to be just the most perfect ship name ever. That baby was our favorite just for her name alone. Sadly, we didn't get to fly her all that much. The occasional discussion about picking up this campaign and running with it again is due largely to wanting to get that ship back, since the GM was so very nasty and took it from us in the last episode.

The name was taken directly from the Serenity rulebook's "Gorram Chinese" section. We combined: "Shiny, awesome, fantastic: Jahn!" and "In someone’s doghouse: Luhn Gohn, literally “a cold palace,”which is where an emperor confines those concubines who have fallen out of favor."  Together it all gave the general idea that our little ship was somewhere very shiny that people go when they fall out of favor.

That idea really worked for us. We love our ship and we were, as it happens, pretty much always in some kind of trouble. Hence our "shiny cold palace", Jahn Luhn Gohn.

Flashback was probably the most ambitious campaign our GM had run to date. In it we essentially played three different characters, each set in a different time.

The first group of PC's were the "Independence Soldiers": Isabella Delores ("Iddy") Claire, Ringo Lassiter and Angelina Verbena. This group began the campaign in 2511, during the Unification war.

The second group of PC's were the "Young Readers" who started the campaign in 2517, after the Unification War. These PC's were young orphans with the "Reader" asset: Jessica Alphonse, Pamela Yang and Eric Render.

The last group of PC's were the "Ex-Blue Sun Agents": Sierra Three, Echo Five and Michael Seven. These character were actually the older "Young Readers" who began the game with the combined memories and experiences of both the Young Readers and the Independence Soldiers.

Each game session usually began with a very short segment addressing the actions of the Ex-Blue Sun Agents, followed immediately by either the Independence Soldiers or the Young Readers, which were played through as "memories" returning to the amnesiac Ex-Blue Sun Agents.

This was probably the most utterly awesome campaign any of us have ever played. Seriously. It rocked so hard that you would not believe.

Unfortunately, it's also the campaign that we lost the most from when Geocities ate our previous site. While none of the last few sessions had been published on the site, all of our notes on those sessions had been stored there and were thus lost forever. 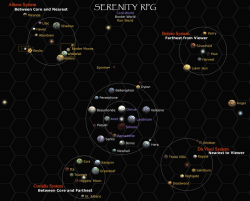